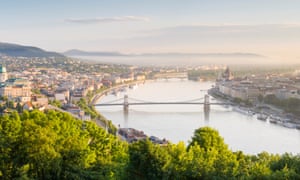 Of the European rivers tested, the Danube had the highest level of antibiotic pollution. Photograph: Nick Ledger/Getty Images/AWL Images RM

Hundreds of rivers around the world from the Thames to the Tigris are awash with dangerously high levels of antibiotics, the largest global study on the subject has found.

Antibiotic pollution is one of the key routes by which bacteria are able develop resistance to the life-saving medicines, rendering them ineffective for human use. “A lot of the resistance genes we see in human pathogens originated from environmental bacteria,” said Prof William Gaze, a microbial ecologist at the University of Exeter who studies antimicrobial resistance but was not involved in the study.

The rise in antibiotic-resistant bacteria is a global health emergency that could kill 10 million people by 2050, the UN said last month.

The drugs find their way into rivers and soil via human and animal waste and leaks from wastewater treatment plants and drug manufacturing facilities. “It’s quite scary and depressing. We could have large parts of the environment that have got antibiotics at levels high enough to affect resistance,” said Alistair Boxall, an environmental scientist at the University of York, who co-led the study.

The research, presented on Monday at a conference in Helsinki, shows that some of the world’s best-known rivers, including the Thames, are contaminated with antibiotics classified as critically important for the treatment of serious infections. In many cases they were detected at unsafe levels, meaning resistance is much more likely to develop and spread.

Samples taken from the Danube in Austria contained seven antibiotics including clarithromycin, used to treat respiratory tract infections such as pneumonia and bronchitis, at nearly four times the level considered safe.

The Danube, Europe’s second-largest river, was the continent’s most polluted. Eight per cent of the sites tested in Europe were above safe limits.

The Thames, generally regarded as one of Europe’s cleanest rivers, was contaminated, along with some of its tributaries, by a mixture of five antibiotics. One site on the river and three on its tributaries were polluted above safe levels. Ciprofloxacin, which treats infections of the skin and urinary tract, peaked at more than three times safe levels.

Even rivers contaminated with low levels of antibiotics are a threat, Gaze said. “Even the low concentrations seen in Europe can drive the evolution of resistance and increase the likelihood that resistance genes transfer to human pathogens,” he says.

The researchers tested 711 sites in 72 countries and found antibiotics in 65% of them. In 111 of the sites, the concentrations of antibiotics exceeded safe levels, with the worst cases more than 300 times over the safe limit.

Lower-income countries generally had higher antibiotic concentrations in rivers, with locations in Africa and Asia performing worst. They peaked in Bangladesh, where metronidazole, used to treat vaginal infections, was found at more than 300 times the safe level. The residues were detected near a wastewater treatment facility, which in lower-income countries often lack the technology to remove the drugs.

Inappropriate disposal of sewage and waste dumped straight into rivers, as was witnessed at a site in Kenya, also resulted in high antibiotic concentrations of up to 100 times safe levels.

The research team is now planning to assess the environmental impacts of antibiotic pollution on wildlife including fish, invertebrates and algae. They expect severe effects. The drug levels in some Kenyan rivers were so high that no fish could survive. “There was a total population crash,” Boxall said.

Water and sanitation: an essential battlefront in the war on antimicrobial resistance.

Water and sanitation represent a key battlefront in combatting the spread of antimicrobial resistance (AMR). Basic water sanitation infrastructure is an essential first step towards protecting public health, thereby limiting the spread of pathogens and the need for antibiotics. AMR presents unique human health risks, meriting new risk assessment frameworks specifically adapted to water and sanitation-borne AMR. There are numerous exposure routes to AMR originating from human waste, each of which must be quantified for its relative risk to human health. Wastewater treatment plants play a vital role in centralized collection and treatment of human sewage, but there are numerous unresolved issues in terms of the microbial ecological processes occurring within them and the extent to which they attenuate or amplify AMR. Research is needed to advance understanding of the fate of resistant bacteria and antibiotic resistance genes in various waste management systems, depending on the local constraints and intended reuse applications. World Health Organization and national AMR action plans would benefit from a more holistic 'One Water' understanding. In this article we provide a framework for research, policy, practice and public engagement aimed at limiting the spread of AMR from water and sanitation in low-, medium- and high-income countries.