Neutrogena, Coppertone and Aveeno products contain banned chemicals that should not be used. Johnson & Johnson, which sells multiple sunscreens with oxybenzone, argues that concerns about its effects on coral reefs "have led to widespread misinformation about the safety of many sunscreens in the marine environment." The company says "no credible science" exists that shows a link between sunscreens and coral reef bleaching. Yet there are many peer reviewed reports that give the opposite opinion.https://https://lnkd.in/dp-kPYf Whatever the out-come, there are safe alternatives to toxic sun creams and cosmetics that do not contain Oxybenzone, so why take the risk to your own health and the environment. Take a precautionary approach use Oxybenzone free sun block and hair products. https://lnkd.in/dWzANVk 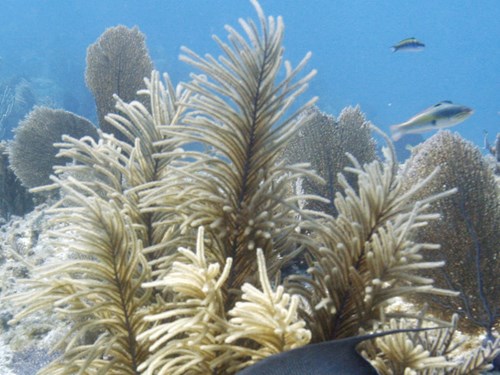 The Key West City Commission voted 6-1 to ban the sale, within city limits, of sunscreens that contain oxybenzone or octinoxate, the Miami Herald reports. Some studies have linked the chemicals to cellular damage in coral reefs. But industry officials challenged the ban, saying the link between the chemicals and coral bleaching isn't proven.

Only one living coral reef exists in North America, and it lives about 6 miles off the Keys. "We have one reef, and we have to do one small thing to protect that," said Mayor Teri Johnston. "It's our obligation."

So proud that Key West & @reefrelief has won the ban of sales of sunscreen w/harmful chemicals tonight at city hall!!!

The banned chemicals are present in most of the sunscreens on sale in the U.S., NPR has reported. Up to 70 percent of sunscreens on the U.S. market contain oxybenzone, and up to 8 percent contain octinoxate. That includes offerings by Neutrogena, Coppertone and Aveeno.

The industry, as well as some doctors, have fought the Key West ban. At Tuesday's meeting, "some dermatologists and industry lobbyists showed up to say banning the sale of such sunscreens would increase rates of skin cancer and likely discourage people from using any at all," the Herald reports.

Johnson & Johnson, which sells multiple sunscreens with oxybenzone, argues that concerns about its effects on coral reefs "have led to widespread misinformation about the safety of many sunscreens in the marine environment." The company says "no credible science" exists that shows a link between sunscreens and coral reef bleaching. Johnson & Johnson asserts that, "According to environmental experts around the world, global climate change, ocean acidification, and unsustainable fishing practices are the cause of coral reef bleaching."

Last year, Hawaii became the first state to pass a similar ban, which also goes into effect on Jan. 1, 2021. According to the text of that law, the chemicals "cause mortality in developing coral; increase coral bleaching that indicates extreme stress ... and cause genetic damage to coral and other marine organisms."

In late 2018, the Pacific archipelago of Palau became the first nation to ban sunscreens with the controversial chemicals, NPR's Emily Sullivan reported. A spokesman for the country's president told NPR that the legislation was based in large part on a 2017 report from the Coral Reef Research Foundation that found widespread sunscreen toxins in the popular tourist attraction Jellyfish Lake, a UNESCO World Heritage site.

Before the vote Tuesday night, at least one commissioner expressed concern that the city of Key West may be opening itself up to litigation. "I'd rather have the coffers of the state of Hawaii defend the legal challenge," said City Commissioner Greg Davila, according to Herald reporter Gwen Filosa. "I'd much rather let Hawaii deal with that expense" of a potential legal defense. Davila was the lone dissenter among the commission. He argued that the science wasn't clear, and that residents should have the freedom to choose what sunscreens they want to use.