Bioaccumulation of persistent organic pollutants in the deepest ocean fauna

The legacy and reach of anthropogenic influence is most clearly evidenced by its impact on the most remote and inaccessible habitats on Earth. Here we identify extraordinary levels of persistent organic pollutants in the endemic amphipod fauna from two of the deepest ocean trenches (>10,000 metres). Contaminant levels were considerably higher than documented for nearby regions of heavy industrialization, indicating bioaccumulation of anthropogenic contamination and inferring that these pollutants are pervasive across the world’s oceans and to full ocean depth.

Chemicals banned in the 1970s have been found in the deepest reaches of the Pacific Ocean, a new study shows.

Scientists were surprised by the relatively high concentrations of pollutants like PCBs and PBDEs in deep sea ecosystems.

Used widely during much of the 20th Century, these chemicals were later found to be toxic and to build up in the environment.

The results are published in the journal Nature Ecology and Evolution.

The team led by Dr Alan Jamieson at the University of Newcastle sampled levels of pollutants in the fatty tissue of amphipods (a type of crustacean) from deep below the Pacific Ocean surface.

The animals were retrieved using specially designed "lander" vehicles deployed from a boat over the Mariana and Kermadec trenches, which are over 10km deep and separated from each other by 7,000km.

The pollutants found in the amphipods included polychlorinated biphenyls (PCBs) and polybrominated diphenyl ethers (PBDEs), which were commonly used as electrical insulators and flame retardants.

PCB production was banned by the US in 1979 and by the Stockholm Convention on Persistent Organic Pollutants, a UN treaty signed in 2001.

From the 1930s to when PCBs were banned in the 1970s, the total global production of these chemicals is estimated to be in the region of 1.3 million tonnes. 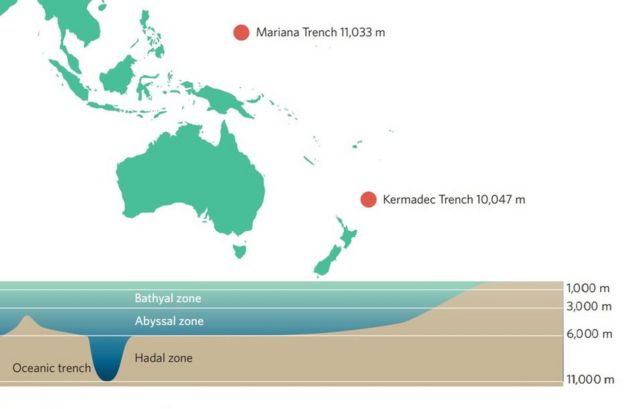 Released into the environment through industrial accidents and discharges from landfills, these pollutants are resistant to being broken down naturally, and so persist in the environment.

In their paper, the authors say it can be difficult to place the levels of contamination found below the Pacific into a wider context - in part because previous studies of contamination gathered measurements in different ways.

In the food chain

But they add that in the Mariana trench, the highest levels of PCBs were 50 times greater than in crabs from paddy fields fed by the Liaohe River, one of the most polluted rivers in China.

Dr Jamieson commented: "The amphipods we sampled contained levels of contamination similar to that found in Suruga Bay [in Japan], one of the most polluted industrial zones of the northwest Pacific."

The researchers suggest that the PCBs and PBDEs made their way to Pacific Ocean trenches through contaminated plastic debris and via dead animals sinking to the sea floor.

These are then consumed by amphipods and other deep sea creatures.

The authors of the study say that the deep ocean can become a "sink" or repository for pollutants.

They argue that the chemicals accumulate through the food chain so that when they reach the deep ocean, concentrations are many times higher than in surface waters.

Katherine Dafforn from the University of New South Wales in Australia, who was not involved in the study, said: "Although the authors were able to quantify concentrations of PCBs and PCBEs in crustacean scavengers from the hadal zone [deep ocean trenches], the source of [persistent pollutants] to these areas and also the mechanisms for delivery remain largely unknown.

"Furthermore, the toxic effects of these pollutants and their potential to biomagnify up the food chain still need to be tested."

But she added that the team members had "provided clear evidence that the deep ocean, rather than being remote, is highly connected to surface waters and has been exposed to significant concentrations of human-made pollutants."