A Scottish marine scientist and business man has claimed that women really could be the key to helping reverse climate change.  The chemicals contained in many of the personal care and cleaning products bought for the home (mainly by women) are toxic to plankton.  These are the tiny marine plants which use our carbon dioxide to make their own food and our oxygen too.  But we’ve lost half of them in the last 40 years!

Dr Howard Dryden, Edinburgh based marine biologist, has been working on the effects of chemical pollution in major aquariums around the globe for decades.

Commenting on why this experience has led him to believe climate change could be turned around by women said: “It’s been quite a journey working with massive amounts of water in aquariums to keep animals safe and healthy. Sadly, there have been times when I’ve been called in because something went wrong, and it is usually because a chemical has been introduced, and toxic to the aquarium environment.”

Dr Dryden continued: “many of us only associate toxic chemicals with heavy, dirty  industries,  but I’ve seen a teaspoon of detergent added to aquarium water kill almost everything.”

Plankton are the little microscopic plants that float around in our oceans in their trillions and trillions and are, in fact, the custodians of the Earth’s climate.  Their numbers have halved in the last 40 years, and according to NASA, they continue to decline at 1% year on year.  This is worrying, because every living thing depends on these plants for life on earth. Trees get all the credit, while its plankton that makes 70% of our oxygen

Dr Dryden said: “Understanding why this is happening is critically important, and I come to the conclusion, that it is our Western lifestyles, which involves a massive use of personal care and household cleaning chemicals on a daily basis.

“We get up in the morning, shower with shower gels containing ocean toxic chemicals; we wash our clothes, often consisting of millions of microplastics, in ocean toxic washing powder.  These chemicals make their way to our inland waters and then to the oceans, soaking up the chemical and pharma pollutants on the way.  Water treatment plants typically don’t have tertiary treatment to deal with some of the modern chemicals found in these products.”

“If we stop and look at the products we buy, and start asking ourselves if it is coral , plankton or ocean safe, then it is probably okay to buy.  The good news is that we can all throw ourselves and the ocean a lifeline.  Women could save the day and vote with their weekly shop.  It is women who I think will take the lead and make the urgent change in our buying behaviours.”

More than 70% of our oxygen is produced by tiny plants in the worlds oceans,  the plants are called plankton and they are also responsible from removing 50% of our carbon dioxide. All life on earth depends upon plankton for our atmosphere, for the climate and for most of our food, yet we have succeeded in destroying more than 50% of all the plankton in the worlds Oceans over the last 50 years.

The problems did not start with the industrial revolution, indeed an increasing concentration of carbon dioxide actually acts as a food for most plants, and if you increase the nutrient concentration with regards to nitrogen and phosphates, coupled with a slight increase in temperature,  then these are perfect conditions for growing more plankton.  Yet in the last 50 years there has been a catastrophic decline in the plankton numbers, so this is not down to climate change, what has happened?

The decline in the plankton and the planets life support system did not start with the industrial revolution,  it started with the CHEMICAL REVOLUTION. After the 1940's, toxic chemical discharges included; herbicides, pesticides, antibiotics, pharmaceuticals, toxic cosmetics, industrial waste and plastic. it is impossible for Nature to evolve to deal with the most toxic of chemicals produced by man because they are not natural chemicals.  The number of chemicals produced are also increasing by around 15,000 different ones every day, nature has no hope of surviving such as onslaught, this is not sustainable, the planet is not sustainable.

It takes a recognition that toxic, persistent pollutants such as Oxybenzone, PCBs, fire retardants such as PBDE, organic mercury and tin are so horribly toxic that there is actually no safe level . The chemicals simple keep accumulating in the oceans, in the marine life and in the sediment.  The concentration of PCBs in the deepest part of the Ocean,  the Mariana Trench at more than 10km deep has a concentration of PCBs 50 times higher than the most toxic rivers in China. Animals or plants can not survive these conditions.  When combined with micro plastic, the plastic acts like a sponge and will adsorb many of these chemicals and amplify their concentration by as much as a million times. Plastic particles smaller than 20nm are adsorbed directly into plants, larger micron sized particles may be eaten by plankton along with all the toxic chemicals in the plastic and chemicals that have been adsorbed by the plastic.  More than 1 in 15 of all life in the oceans now contain plastic and the associated toxic chemicals.

The pH or acidity of the worlds Oceans has declined from a pH of 8.24 during the 1940's, to pH 8.04 and in accordance with data from the IPCC it will be pH 7.95 over the next 25 years.  As marine biologists, we design and operate some of the largest public aquaria life support systems, we have experienced and know for sure that if the pH were to drop to pH 7.95 then carbonate life forms start to dissolve and this will initiate a trophic cascade destabilisation of the entire marine ecosystem.

What does this mean?

When the trophic cascade starts it will be very quick, everything will appear normal, and then over a period of perhaps only 3 years, all carbonate based plankton will die, most of the seals, birds and whales will die as well as most of the fish, and along with them, the food supply for 2 billion people.  The seas will be colonised by toxic algae, bacteria, and jellyfish.  Atmospheric oxygen levels are currently dropping more than 4 times quicker than carbon dioxide is increasing,  if we lose the plankton then oxygen levels will rapidly start to decline, carbon dioxide will increase and we will have run-away climate change.  It is not a question of a different group of algae  taking over and making oxygen,  the oceanic water will gradually become more and more acidic and toxic.  Life is currently being destroyed 1000 times quicker than the last extinction event when a meteorite crashed into the Gulf of Mexico, but we all seem to be completely oblivious to what is happening like a suicide of lemmings falling off the edge of a flat earth.

Carbon dioxide and the burning of fossil fuels is certainly implicated,  but it is unlikely that CO2 emissions are going to decline until around 2030,  even if we stopped all CO2 emissions tomorrow, it will slow down the process, but because we are destroying the oceans and planets life support system, the ocean ecosystem will still crash and we will still have climate change and life on earth will still become impossible.  The solution starts with a realisation that there is more to climate change than the burning of coal and oil, we need to live sustainable lives and this means zero discharge of toxic chemicals, it also means zero discharge of plastic in all its forms.

Due to the inertia in the system we don't have 25 years,  we only have about 10 years to eliminate plastic and toxic chemical pollution.

Through the Oceans a Lifeline, stop the pollution, because in 10 years it will be too late. 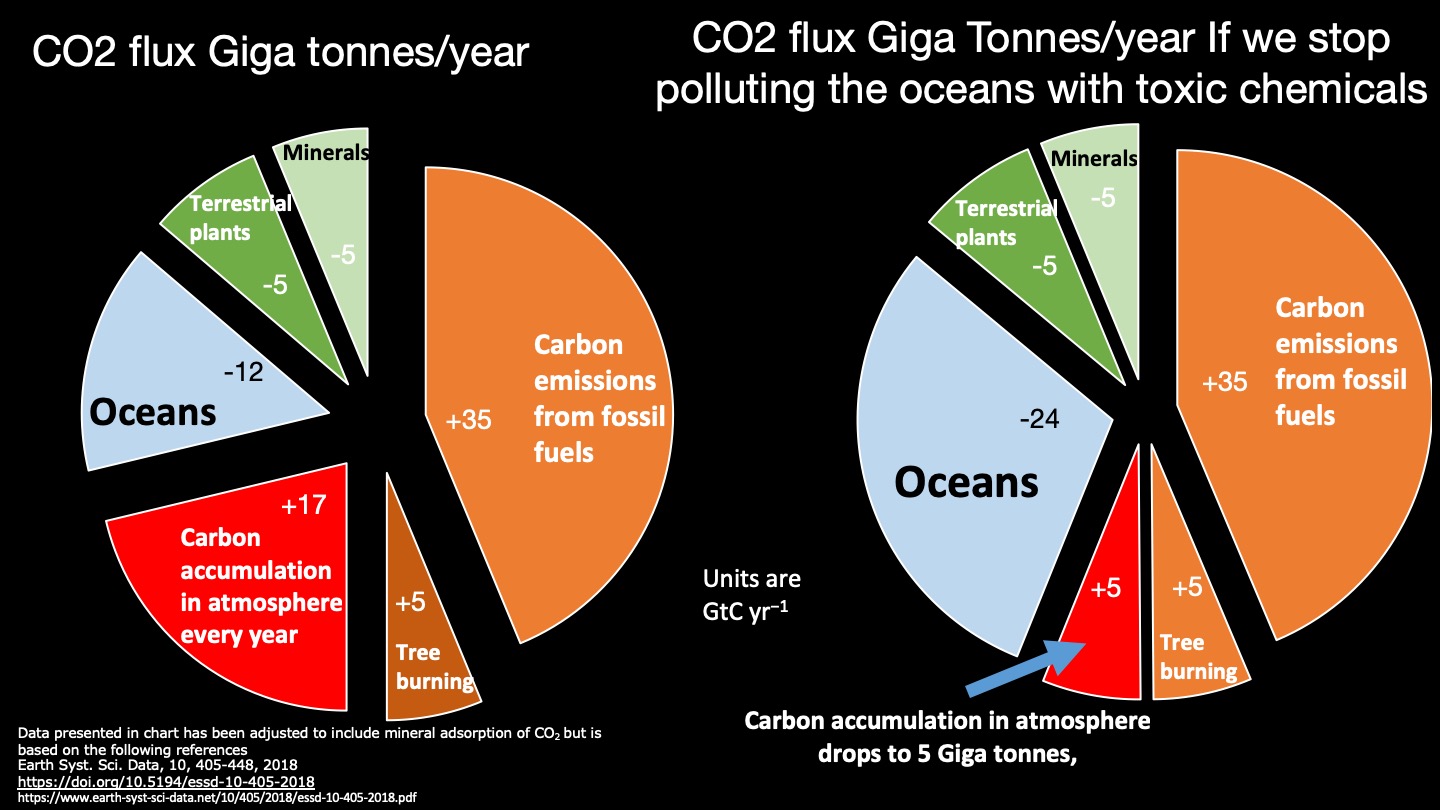 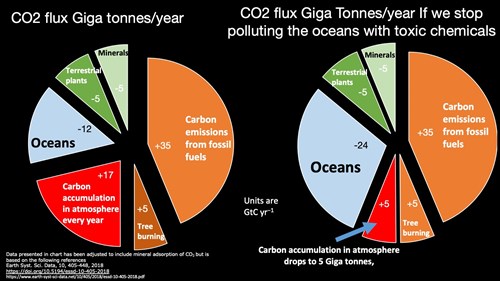