What we put in our shopping baskets can save essential coral

You can save our Coral reefs

A Scottish Scientist claims that we can all be part of a simple solution to reverse climate change, and this involves saving corals which are the nursery ground for over 25% of all marine life.  It starts with what you put in your shopping basket at the supermarket.

Dr Howard Dryden, Edinburgh based marine biologist and businessman said: “We’ve already lost 50% of the world’s corals and the remainder are dying at an alarming rate. It is nature’s way of telling us that there’s a climate crisis.

Dr Dryden, frustrated by the lack of focus on the root cause of climate change, started Global Oceanic Environmental Survey (GOES Foundation) and said: “Coral loss and bleaching was nature’s way of screaming at us that we are looking for solutions to climate change in the wrong place”.

“The work being carried out by fellow marine biologists around the globe have demonstrated that products we use on our skin every day, or to wash our dishes and clothes, have devastated coral populations. There has been a lot of focus on sunscreens containing oxybenzone.  This chemical can help stop us burning in the sun, but it does the exact opposite to corals.  What we aren’t told is that it is a endocrine and carcinogenic chemical, yet we lather it on ourselves and our kids, not realising that we’ve contributed to the destruction of the nurseries for 25% of all ocean life!”

A clean ocean with healthy plankton will absorb twice the CO2 it does today - from 12 to 24 billion (giga) tonnes per year.

“This will almost neutralise current human-related CO2 emissions accumulated in the atmosphere, estimated to be 16-17 billion (giga)tonnes per year.

“Plankton is being wiped out by the toxic chemicals we use every day, and matters are made worse when these chemicals combine with plastic pollution.  Each and every one of us is contributing to the problem every day, because these chemicals are contained in the products we use to clean our homes and ourselves.”

“But, by implementing cheap and simple technology water companies can play a big role in stopping the killing of our plankton.”

Plankton are really tiny, but if they are in healthy ocean conditions with lots of food around, their numbers can multiply rapidly and they’ll use more carbon dioxide then trees and produce the oxygen we breath.  It’s plankton that regulate our atmosphere, but now that we’ve killed off half of them, there is nothing else as effective draw in the carbon dioxide fuelling climate change – even if we all had EV’s or wind turbines, it won’t be enough to address the crisis.

Plankton was absorbing around 50% of human-caused CO2 emissions, but the very bad news, according to scientists at NASA, we are losing 1% of the earth’s plankton every year.

Dr Dryden added: “If water treatment companies and their shareholders, could take the simple step of removing toxic chemicals and microplastics at the end of their processes, they could be everyone’s superheros and help the oceans recover.”

It is cheap and simple to install, what’s often referred to as, tertiary treatment systems on to the back end of municipal and industrial wastewater treatment plants, and this will remove more than 90% of toxic chemicals.  This could be the most effective international CSR project with the biggest impact for our climate.”

“At the moment, only about 5% of all global water treatment plants have tertiary treatment installed and yet, for less than $30 per person on the planet, this simple step alone could help our oceans recover, reverse climate change and save humanity.

He added: “Oceans without plankton means carbon dioxide will accumulate in our atmosphere instead.

“Plankton productivity is 1000 times quicker than the growth of trees, so once we eliminate the toxic chemical and microplastic pollution entering into the marine ecosystem we can start down the road of reversing this man-made disaster.”

In the meantime, Dr Dryden said everyone could play a part by stopping using products containing toxic chemicals and stop using single use plastics and this would help the water companies too.

He said: “We can all help by shopping and using ‘ocean safe’ cleaning and personal care products.  There are products on the market now which are much kinder to the environment.

Dr Dryden has posted a list of chemicals we should avoid: “this has to be a win-win for all of us.  We would address climate change and create cleaner, safer environments for everyone around the planet.  If the world’s rich list came together we could focus on the root cause of climate change, and not just address the symptoms.”

More than 25% of all life in the Oceans depends upon coral reefs as a nursery and breeding ground, without coral reefs many species of fish and marine life, including whales would become extinct.  Coral reefs are also a valuable source of fish protein for island and coastal communities and essential for the tourist industry in many countries. 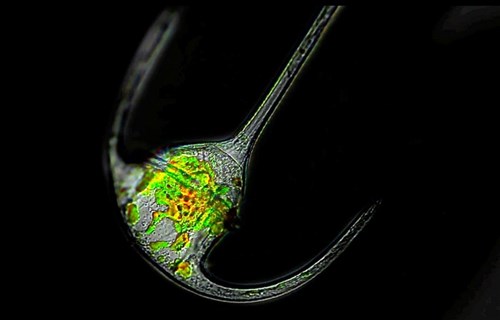 Coral is a symbiotic organism,  the colony of polyps have an algae partner that grows inside the coral and provides the coral with oxygen and food.  The symbiotic partnership is very delicate and if the coral is subjected to any pollution, then the poly will tend to discharge the coloured algae back into the water.  This is called coral bleaching, and when it happens the coral goes white and becomes very sensitive to higher temperatures.

Chemicals that have been shown to be incredibly toxic to coral include Oxybenzone which is found in most sunscreen and cosmetics. Oxybenzone will come off when you go swimming in the sea and it will tend to form an oil film on the surface.  The oil gets sucked onto other particles like micro plastic, where the chemical gets concentrated on the plastic particles like a sponge.  The concentration of chemicals such as oxybenzone may increase by as much as 1 million times on a particle of plastic.

Coral feed on small particles, they grab the micro plastic containing the toxins, the coral has now been injected with a fatal dose of chemicals. The reason why the chemicals are so toxic is because they react with sunlight.  Most sunscreens do not actually block out all the UV light,  what they do is change the light wavelength from a short UV light to a longer  less energetic wavelength.  Because short wavelength UV light has more energy than longer wavelength light, this energy must be released and by this process free radicals are generated.  It is the action of the free radicals that starts to oxidise the algae and the coral from the inside.  The same reactions take place on the surface of your skin, while the sunscreen may be relatively non toxic,  the chemical reactions that take place when it is exposed to sunlight, are very toxic.

The first response is for the algae partner to be discharged out of the sick coral.  The coral now becomes very sensitive to higher temperatures and disease.  If the environmental conditions are not perfect then the coral will die.

You may think that it is impossible for a cosmetic to be soo toxic to the environment, however given the delivery mechanism of micro-plastic to the coral it would only take about 20,000 tonnes of Oxybenzone to kill all the corals and most all marine life in all the oceans. 20,000 tonnes of Oxybenzone added to the Oceans all at the one time would kill the planet. The world actually makes and discharges over 17,000 tonnes of Oxybenzone every year,  the only reason why the oceans are still alive is that it is discharged over the course of one year.  However we have still succeeded in killing half the worlds coral reefs and the remaining half will be dead in 10 years unless we stop the pollution.

What are the implications of losing all the coral reefs?  well perhaps 1 billion people will be on the move because of loss of habitat, income and food.  Climate change will be the least of our problems.

Throw the Oceans and Life Line and stop using toxic cosmetics, because in 10 years it will be too late to save the coral reefs, the oceans and humanity.