We need a rethink how we view climate change.

With regards to the oceans, there is a diurnal migration of 5 Giga tonnes of copepods (zooplankton) every night from around 400m depth to the surface, this is equivalent to 17 million 747 jumbo jets.    This is by far the largest mass migration of animals on the planet, and the vertical motion of the water could move as much water equivalent to the moons impact on tides.
_____
Copepods are 80% water, and carbon is around 50% of what’s left, so 0.5 giga tonnes of C migrate. This mass migrations moves a huge amount of water. The anthropogenic production of carbon as C by man is 0.03 Giga tonnes a day,  which is equivalent to 6% of the migration of copepods.   Some of the copepods will die and sink to the abyss, some will be eaten by fish, and their faeces sink to the abyss, the copepods will eat phytoplankton and smaller copepods, and their faeces sink to the abyss, this is how carbon is locked out of the system. Copepods expend a huge amount of energy swimming and ingest their own body weight per day  if the food is available, based on just C, this is 0.5 Giga tonnes/day, and if 6% reaches the abyss, then this equates to the data for C fixation by the IPCC.
_____
Anthropogenic C is 9.4 giga tonnes/year, deduct silicate mineral sequestration, this drops it to 7.7giga tonnes, deduct oceanic sequestration, and we have approx 4.7 giga tonnes. If reports such as Boyce and others are accepted, then we have lost around 50% of marine productivity over the last 70 years due to pollution from plastic and toxic for every chemicals, such as PCB's, PBDE, PFOS, Oxybenzone.  If we had not lost this biomass then C fixation by the oceans would equate with an extra 2 to 3 giga tonnes of Carbon  This leaves a maximum of an additional  1.7 giga tonnes of C to be sequestered by terrestrial ecology. This could be achieved by restoring wetlands, mangroves, seagrass and marshes and by allowing soil to sequester C.
_____
GOES is focusing on the oceans, we think the impact of pollution on primary productivity is selectively hitting meso and micro zooplankton, because these organisms are ingesting small particles of plastic that could be loaded with lipophilic toxic chemicals, and this is the question that we need answered.  The GOES CDCP (Collaborative Data Collection Project) by yachts could be used to numerate the plankton numbers as well as plastic fraction in all oceans. A question that could be answered by Chemists Without Borders  could be; are the concentration of chemicals such as PCBs homogeneous on micro-plastic in our oceans as indicated by the results from MARBEF?  When we couple these two questions and answers then we get much closer to an explanation and a solution for climate change, and protection of our oceanic ecosystem.
_____
As stated in the GOES report,  if there is not a chemical toxicity reason for climate change, then we can’t actually can stop the worst effects of climate change and it going to reach the tipping point over the next 10 to 30 years and that a temperature change is probably the least of our problems.  If the research confirms that environmental pollution is indeed the main driver, then we need to eliminate all plastic and toxic for ever chemical pollution, everywhere.  Even if pollution is not the complete solution, it is absolutely a major part, and what's wrong with cleaning up our planet? 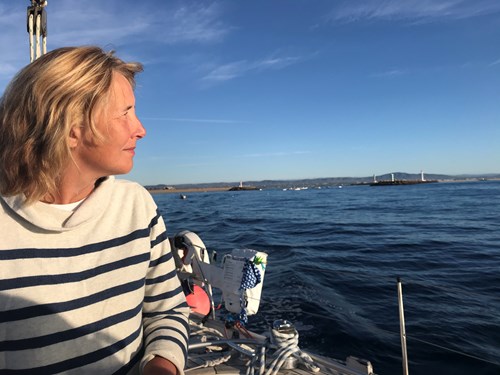 Looking out over the Rio Formosa in the Algarve Portugal, one of the largest areas of SeaGrass in Europe
Little known facts